After the sussess of the Grand Depart of 2014, when the Tour de France started in Yorkshire, orgenisers of the tour made it an annual thing.   It can't be part of the full Tour de France each year so a new race was set up.

Now into its second year the Tour de Yorkshire takes place across the whole of Yorkshire and even into Middlesbro' this year.

The three day event is coved in full by BBC Local Radio and as you would expect the BBC Bus is there to lend a helping hand to what is a logistical nightmear for the stations.

On Friady the 29th of April the Tour started in the historic market town of Beverly in the East Riding.  The Bus was in the the village of Market Weighton to watch the tour leave the East Riding. 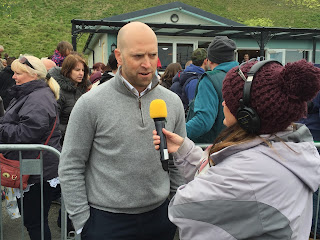 On Day two (Saturday the 30th of April) we got in to West Yorkshire to the start line that was in Otley.  There we watched not only the start of the mens race but the start of the very first womans race with 27 year old Lizzie Armitstead starting the race in her home town.   Armitstead was a member of the gold medal winning team pursuit squad at the 2009 Track World Championships, her second appearance at a senior world championship event.

On the last day we headed back east again to scarborough to the finishing line by the beach.  Were we saw Danish Thomas Voecker beat Ireland's and team sky's Nicolas Roche by just six seconds over the whole three days.

Aslo on the blog.