In a trip to Inskip Pre-school, Jessica is given the chance to show off her footballing skills. 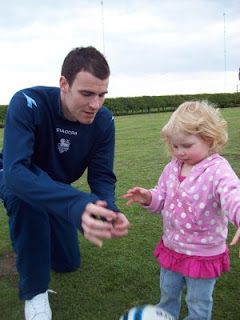 Faces with PNE Keeper Andy Lonergan she side foots him and scores a goal.

Jessica didn't want to leave and may be back in September, (at the Pre-school that is - not takeing shots in Championship keepers.

For more photos go to adrianchenery.co.uk 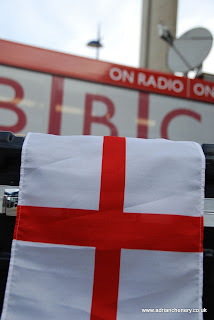 The BBC Bus is back and being used for Big BBC campains.
Over the last week I have been in MK finding out about what it is to be English!
The idea was to sing a new "english" song in Mk, get on a London Routemaster to Luton then by Train to London where the story was told all over again.
My photos are (From MK only) are at workphotos.adrianchenery.co.uk
From MK it was on to Birmingham for St Georges day in the square. A full filled day and loads of people to talk to.
at April 26, 2009 No comments: