Bristol Rovers beat Grimsby Town on penalties to win the Conference promotion final and secure an instant return to the Football League.

Both sides hoping for a return to league two when they faced each outer at Wembley on Saturday the 17th of May 2015.

All square after full time and extra time it was spot kicks that settled the difference in Bristol's favour.

Broadcasting before the game on BBC Radio Bristol and BBC Radio Humberside we got all the fans excitement as they headed into Wembley.

BBC Humberside at 40
Turn Back Time

After a successful battle agents skin cancer some 10 years earlier he was diagnosed with cancer again a year ago.

Out of the great sadness that staff of BBC Radio Derby are felling came some good right out of the heart of Colin himself.

Before his death Colin spent time promoting Skin Cancer awareness, how to avoid it and what to
look out for.

Linking up with the charity Skcin BBC Radio Derby hit the road to have peoples moles tested on the streets.

On the streets in Belper, Long Eaton, Burton and Derby, The BBC Bus was joined by two doctors per day to check peoples moles.

Over 500 people came to the the over the 4 days all working about a mole or mark on their skin.  I can't give numbers here but I know that some of the people that where seen to have been told it see their doctor as a mater of urgency. Most however were fine.  Even after his death Colin is saving lives. 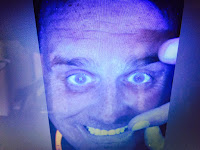 Also on the bus was Anthony Hubbard from Skcin.  Along with the normal advice, Anthony had a Ultra Violet camera that can take photo of skin damage on your face due to the suns rays.

This photo is of me, (as Im not going to post one of a listener).  Normally you should shut your eyes and maybe not have such a cheesy smile but you can see that my skin in fine (for now).

At the time of writing this I have just seen that the appeal has raised just over its first target of £75000.


The MK Marathon takes place on the first bank holiday in May each year.

As last year, we were used as the official start with the starter on the roof of the bus.   As soon as everyone had passed we decamped and moved a few hundred yards closer to the finish line.


The winner of the main race was a man who claimed he only started training on the Thursday before
and had been on a night out before the race.  I'm not sure how much I believe of this but that is what he said.

There where other races including a half marathon, a super hero race and a batton relay.