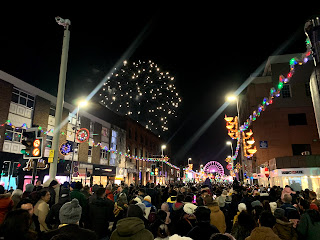 The city of Leicester has one of the highest Asia comunitys in the U.K. Because of that Leicester has the biggest Diwali celibrations in England,

Over 35,000 people of all faiths attend the switch on of the lights on the Golden Mile. The festivities are loudest along Belgrave Road, in the heart of the city's Asian community, where the two main events take place each year, and that is where the BBC Bus was this year.

Having been moved from the Cossington Recreation Ground after very wet weather over the past week, BBC Radio Leicester was based at the BBC Bus on Belgrave Road and Law Street.