BBC Devon's Miles On The Money

Two of their main daytime presenters were to race around the county, visiting every single town in Devon racing money for charity as they go. 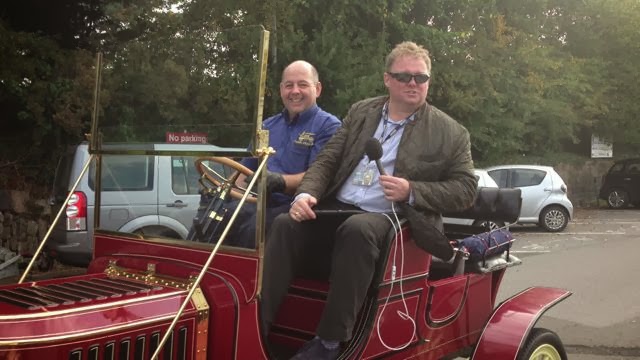 
You can only use public Transport


They only had to stop for one thing... Their own show.

The two Davids still had to stop on the way to present their shows as normal with David Shepard presenting the Mid-Morning and David FitzGerald presenting the afternoon show.

The winner was not the first to cross the line,  it was a point system based around gaining points for being first and raising money and losing points for not using public transport.

Fitz razed the most money and arrived at the final destination first however he did cheat, at lest one time per day.  So he ended up in negative points leaving Shep to claim the win.

The real winner, however, was the charities that the money was raised for.  The  Wacky Races raised
over £1000 for local charities.

Working with Devon Community Foundation they giving cash gifts to local groups and organisations who need it most.

So far this year grants have been made to:

£638 to South Devon Special Olympics Gymnastics Club to provide training working with gymnasts with special needs.
£780 to Chulmleigh Recreational Association to offer physical activities for young people with special education needs in North Devon.
£1,000 to South Devon Multiple Sclerosis Society to help provide physio sessions and transport costs for people with MS.
£2,000 to Community Action - Summer Adventures to provide activities,learning opportunities and fun for young carers aged 8-14.
Without your support this would not have happened - THANK YOU!

See a TV package of Miles On The Money

Also see Miles On The Money Just giving site.
More at adrianchenery.co.uk
at September 27, 2013 No comments:

Carry on Up the Coast with Laura Rawlings

Laura Rawlings has been presenting the afternoon show on BBC Bristol and BBC
Somerset since April 2013.
Its now her  tie to take her show on the
road.

Starting in Minehead on the Monday
each day will be a trip down the coast until it reaches Bristol on the Friday.
The BBC Bus didn't make it to mainehad due to comitments in Hull however I was with the team on arival into Burnham On Sea on Tuesday.

As well as all the normal interviews that Larura puts in her show, she went down to BARB, who look after the hovercaft lifeboat on the Burnham Bay.

Wednesday's venue was by the hostric Weston Super Mear peir.

Thursday across from the peir in Cleavdon

And the final day was in Bristol by the M Shed

Also on my blog... Turn Back Time

More at adrianchenery.co.uk
at September 13, 2013 No comments: