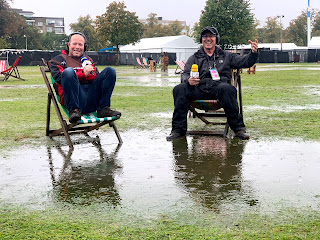 The UCI World Championships are the Road World cycling championships and as such atract teams and suporters from across the world.

In September 2019 the championship where held in Yorkshire, focused around the town of Harrogate.

Based in the fan zone on the Harrogate Stay, BBC Radio York and BBC Look North (Leeds) both came along each day to broadcast.

It was all going very well until midweek.  Thats when the rains came in. A lot of Yorkshire was under water and the fan zone itself was tuned into a swamp.  The fan zone closed however the racing carried on and so should the briadcasting, from a closed fan zone.


BBC Radio Stoke love to get out and about and talk to listeners where ever they find them.

Starting on Tuesday the 3rd of September 2019 Bbc Stoke based themselves in the market place of Stafford outside the Guildhall.
On Tuesday, Wednesday and Thursday, Paula White and Denholm Siegertsz both came out the office and head to Stafford to spend mid-morning finding out what made the people there tick.

But it was until Friday when Perry Spiller came down the A34 and brought his full show from the market place. A fun-filled 3 hours ending with Top-Of–The-Pots in the last half hour.

More at adrianchenery.co.uk
at September 09, 2019 No comments: